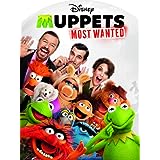 First of all, let’s throw something away from this discussion. While it may be convenient shorthand to reference the situation, I don’t care for the phrase “selling out” — it reminds me too much of the jealousy of one artist towards another who is more financially successful.

That being said, let me digress for a moment. I LOVE the Muppets. I remember sitting glued to the television when The Muppet Show was broadcast in the United States, and eagerly bought tickets as an adult to the various Muppet films. It’s been a long dry spell with not much Muppety interaction until 2011’s release of The Muppets to theaters. I was delighted to see the Jim Henson’s creations making a comeback in popular culture.

Cut to the last few months, when Disney Studios begins to hype the newest installation of the Muppet franchise, Muppets Most Wanted. The trailers for the film have definitely piqued my interest, but something is bothering me: The Muppets, in promoting the film, are being used as shills for everything from Cars to bottled tea.

While it’s great — and I mean great — to see the muppets making such a strong comeback, I can’t help but wonder where this is going. The Muppets — a spin-off from the classic characters used as educational tools on the TV program Seasame Street — have never been anything other than a commercial venture as far as I can tell. Perhaps I haven’t seen as many commercials featuring the Muppets simply because no real opportunities existed previously on a national scale. Now, with Disney’s unbelievable marketing power behind them, perhaps they will occupy a niche they were always meant to.

Even so, it makes me uneasy. Perhaps my discomfort comes from remnants of childhood naivete in seeing the Muppets as some sort of quasi-holy icons, pure and unsullied by mere commerce. In doing a search for links to the recent commercials, I came across THIS: a Wikipedia site dedicated to all the many appearances of Muppet characters in commercials.

Clearly, the Muppets have been hawking a wide variety of products for decades. I was well aware of their work for non-profits and government agencies — spots from the 1970s promoting good nutrition, and in the 1980s on behalf of the National Wildlife Federation, spring to mind — but I had conveniently forgotten how many commercials they’ve made over the years – some of which I’ve even seen before as part of bonus features on DVDs, or included in documentary programming about the Muppets.

In light of this, to say the Muppets have betrayed some sort of creedo removing themselves from commercial advertising is obviously ludicrous. The folks at Disney are smart; by placing the Muppets in other people’s commercials, they not only get to build the Muppet brand once again, but they also get a free plug for the upcoming film inserted into each such advertisement as part of the deal. I would guess they’re actually making money from this arrangement, and having to spend virtually nothing to promote Muppets Most Wanted.

I’m grateful that the folks at Henson Studios had the foresight to — with one or two notable exceptions — separate the Seasame Street characters completely from those that went on to fame as the Muppets. It avoids those beloved characters whom kids and parents rely on as teachers and mentors promoting products to impressionable youngsters, which is strangely ethical in these seemingly lawless times.

I’m looking forward to seeing Muppets Most Wanted. My inner Muppet can’t wait to see Kermit, Gonzo, Pepe the King Prawn and the others in action one more time.