Two things had me thinking of the classic, 1960s-era Star Trek television series. First BBC America is running mini-marathons every Friday starting late in the afternoon where they run four or five episodes, then loop them for a second showing, ending well after midnight. Second, famous gamer-dude John Wick has been talking on his Facebook page about viewing classic Star Trek episodes, many of them for the first time, under the hashtag #trekforthefirsttime. His reviews are brief, usually insightful, and often pretty amusing. 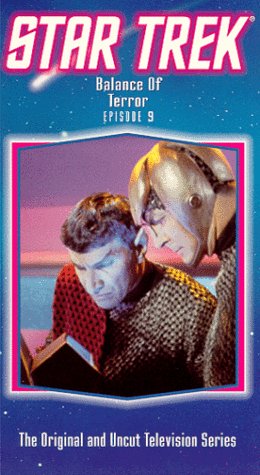 As I rewatch these episodes myself, I realize how much my world-view has changed since I was a youngster in small-town Wisconsin. Episodes that I LOVED as a kid seem more trite, less well-written, or poorly paced. Perhaps this is a function of greater patience, or of greater understanding of plot and pacing. Who knows.

Anyway, several episodes I merely liked then have morphed into my favorites. Take for example, episode 9 from the first season, “Balance of Terror” written by Paul Schneider. In it, the Romulans have developed stealth technology, and are using it to destroy Federation outposts on the border between Federation and Romulan space. Mark Lenard, who went on to greater fame as Sarek, Spock’s father, both in the original series, in several of the feature films, and in at least one episode of Star Trek: The Next Generation, plays the Romulan Commander, and the script is written such that the viewer is likely have considerable sympathy for him. This episode perfectly encapsulates what good space opera should be, as the crew of the Enterprise tries to figure out how to stop this invisible menace. It is arguably the single best episode of the series. 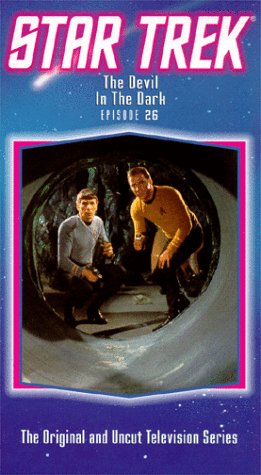 Another more recent favorite, “Devil In The Dark,” episode 25 of season one, has the Enterprise responding to a distress call from mining planet Janus VI. The miners are being attacked — burned to a crisp by some sort of acidic compound — by an unknown creature. Kirk and Spock realize that the creature is intelligent, and after wounding it, are able to communicate and discover the creature –which calls itself a “Horta” — was merely protecting her eggs from the miners, who thoughtlessly destroyed many of them, thinking they were merely silicon nodules. One of the more thoughtful episodes in a thoughtful series, it may come across as slightly preachy in its environmentalist undertones, but still strikes a moderate chord for negotiation before violence — a rare quality in television science fiction of the 1960s.

The Horta was played by veteran bit-part actor Janos Prohaska, who had to huddle and emote from under a blanket covered with painted foam rubber for his scenes in the episode. The Horta is often referred to jokingly as the “Pepperoni Pizza Monster” and once you see it, you’ll get the joke, too. The series didn’t have a very substantial special effects budget, even for the time, but they did the best they could with limited resources. 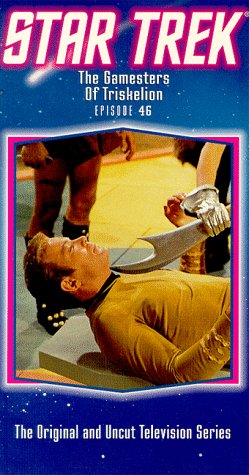 Formerly one of my favorite episodes, The Gamesters Of Triskelion — episode 46 from season two — is pure fluff, with no small amount of T&A thrown in for a show whose ratings were beginning to sag. The episode features a standard Trek trope: godlike beings amuse themselves at the expense of hapless human mortals. This trope was used often, but sadly only occasionally to good effect. The gladiatorial combat scenes are predictably lame, but it had plenty of action, which my young mind found irresistible, I suppose.

In retrospect, the thing I find most appealing about Star Trek — particularly the original series — was its unashamed message of hope: hope for the future, hope for the advancement of science and technology, hope for the improvement of relations between Earth peoples and nations. With such a positive overall message it’s small wonder the show lives on even today. Though I think the hopeful message has been overwhelmed by the special effects budget in more recent times, there is still that spark that Trekkers of all ages seem to agree is worthwhile. In rewatching this show, I’ve been enjoying my trip down memory lane from a not-so-simple time. Perhaps, simplistic though it may be, I’ll find in it the courage and the fortitude to help me deal with today’s not-so-simple times.