With halloween only a week away, I’d like to recommend a few films to help inspire the Halloween Spirit. Not all of them are, strictly speaking, scary, but all of them capture aspects of the holiday, and many can be viewed the year ’round. 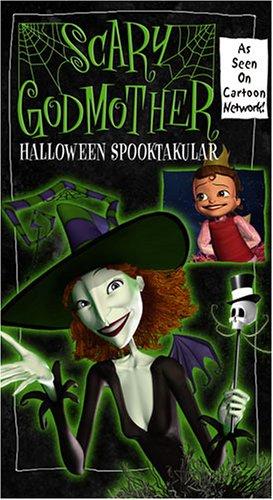 First up on my list is a double-feature based on a popular graphic novel. Scary Godmother is the brainchild of Jill Thompson, who is also known for having illustrated some of Neil Gaiman’s Sandman comics, and her solo graphic novel project, Scary Godmother, was made into two animated feature films. The first, Scary Godmother: Halloween Spooktacular, tells the story of young Hannah, who is ditched by her older cousin and his friends while trick or treating on Halloween. Locked inside a reputed haunted house as a cruel prank, Hannah’s tears summon her Scary Godmother, who introducers her to the many denizens of the “Fright Side,” helping Hannah to overcome her fear of monsters. The second, Scary Godmother: The Revenge of Jimmy, takes place the following year, when Hannah’s older cousin Jimmy, terrified in the previous film by the denizens of the Fright Side, takes matters into his own hands to prevent Halloween from coming. Both are excellent children’s fare, but have plenty of entertainment for adults, including a rocking soundtrack that I wish was available separately in a collection. Sadder still, the two Scary Godmother films can be challenging to find; originally produced for the Nickelodeon network, Netflix doesn’t have them available currently, but they appear randomly on a diverse selection of cable channels at this time of year. They can also sometimes be found in bargain DVD bins at video stores and chain department stores such as Target.

For more serious fare, try the H.P. Lovecraft Historical Society’s Call of Cthulhu. A faithful adaptation of Lovecraft’s short story of the same name, Call of Cthulhu is filmed in black and white and without sound to better capture the feel of the era in which Lovecraft set the story to full effect. The occasional dialog screens present the dialog nearly word-for-word as Lovecraft wrote it. Also good is their rendition of Lovecraft’s “The Whisperer in Darkness,” though that film, while still black and white and nearly as faithful to the original story, does have full sound.

Similarly, the film Dagon, based on Lovecraft’s “The Shadow Out of Innsmouth,” is also a quite faithful adaptation, though set in modern times and on the coast of Spain rather than using the eponymous fictional town in Massachusetts.

Last, but not least, is the original, black and white version of The Mummy, starring Boris Karloff in the title role. The Mummy is actually a love story, and this one has a fascinating twist I did not expect from a Hollywood film — particularly in the less enlightened 1930s. As he did so often with his roles, Karloff infuses the character of Imhotep/Ardath Bey with enough human emotion that to sympathize with him is inevitable. One of the classic Universal Studios monster movies, The Mummy was released in 1932, which coincided with a wave of interest in Egypt, inspired no doubt by the discovery in late 1922 of the lost tomb of the boy-king, Tutankhamen.

Whatever your fancy during this spooky time of year, there are plenty of ways to get yourself in the proper mood to celebrate the season and the end of harvest time. A good scare is healthy now and then, and I hope you enjoy these films as much as I have. I wish you all the best the season has to offer.