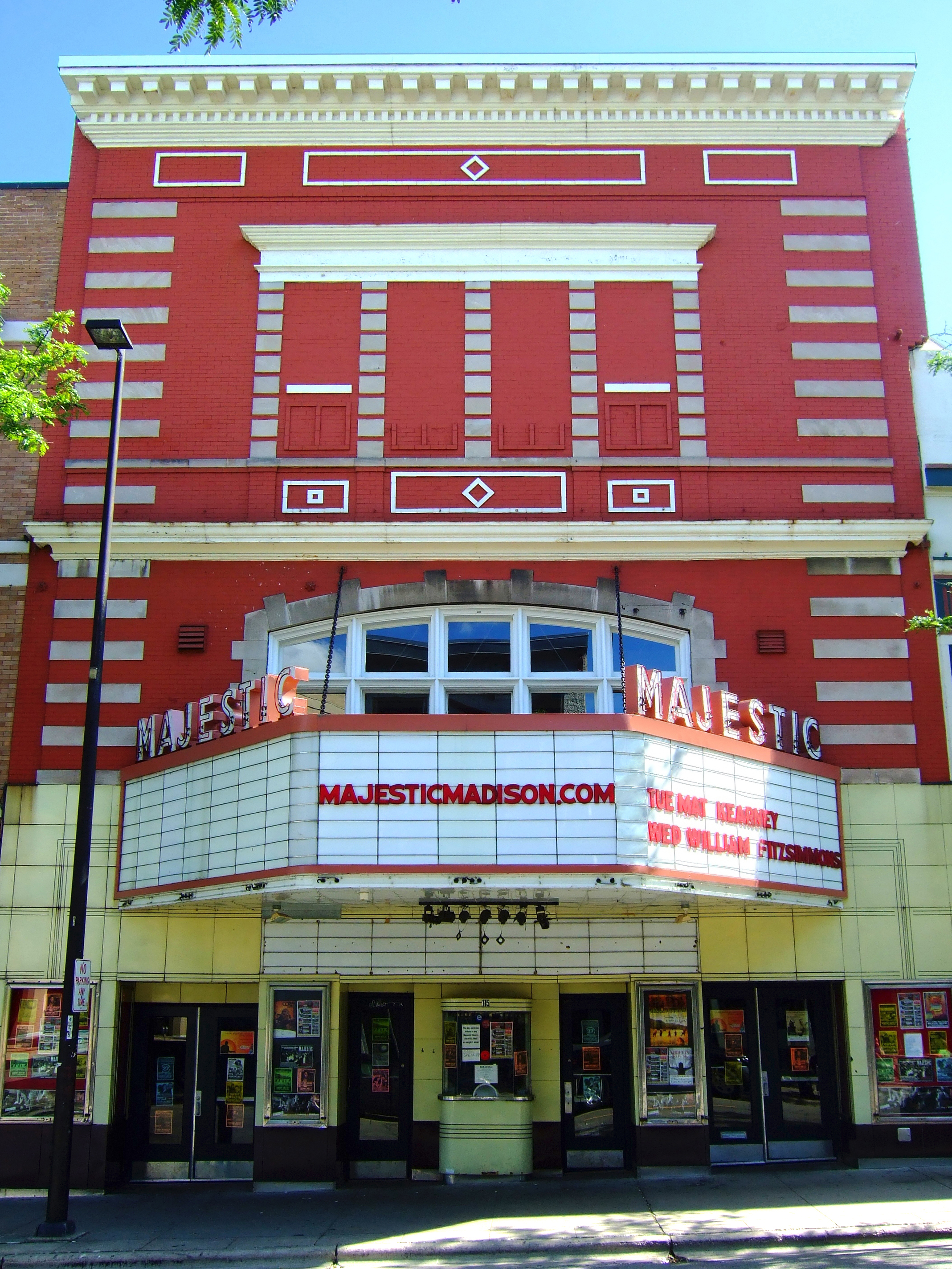 When I first moved to Madison, Wisconsin many years ago, I landed a job working in a movie theater. The theater was an “Art house,” showing foreign films, documentaries, and basically filling a niche that other theaters had ignored. The theater I worked at was technically part of a chain: Landmark Theatres also managed theaters in Seattle, Minneapolis, and Milwaukee, among other cities. Mostly, they rented existing theater buildings; this became a major issue at the Majestic whenever major maintenance needed to happen, as the building’s owner and tenant argued endlessly over who should pay for repairs.

I had lots of jobs while I worked there: I sold tickets, sold popcorn, cleaned the place after hours (for extra money) and for a brief period I was even the assistant manager. I was in that building a lot, and came to know just a few of its secrets.

At one time, the theater, The Majestic Theatre, was a vaudeville house. While a brief search by theater buffs didn’t discover anything concrete, it’s likely that popular vaudeville acts such as the Marx Brothers and W.C. Fields played there between the theater’s opening in 1908 and the late 1920s. Being on the then passenger rail lines between Chicago, Milwaukee, and the Twin Cities, gaps in performing schedules between those cities leave open a tantalizing possibility.

Changing the marquee was another job I was frequently saddled with: being a tall guy, I had a distinct advantage. The marquee usually only changed once a week; in the earlier days of my employment there, it changed several times a week — it was an older theater and only had one screen, so to maximize potential, it showed several different films over the course of one week, each for only a couple of days. The foot-tall plastic letters for the marquee were kept on a large table in the basement. The Majestic’s basement at that time was a central room backstage with several doors. At the time I worked there these were storage rooms for cups, napkins, and other supplies; a tool room/workshop; and a junk storage room. In former times those rooms had been dressing rooms for the performers. The words on the marquee had to be planned out to make sure everything fit in the available space. The letters were then stacked in a box and lugged to the lobby. The ladder would have to be taken out the back door and around the corner to the front of the building: two people carrying a rattling, ten-foot tall aluminum ladder through the auditorium while a film was being shown would be more than a little distracting.

Once the ladder was set up, the old letters would have to come down. Clever staffers would re-use as many of the existing letters as possible to save time and effort. Also, moving letters was less gross than pulling them down: in the summer, in a city surrounded by lakes, spiders proliferate. These spiders were gray with small bodies and huge abdomens, and they built the flimsiest of webs. They didn’t have to work hard for a meal: the bright lights of the marquee brought in all the bugs they could eat, so they grew big and fat over the summer, with abdomens as large as my thumb from last knuckle to tip. Being on a ladder and watching them drop down off the letter I was holding was far better than being underneath as they parachuted to the ground. There was also the occasional bat, but that was rare.

One film I can’t help but remember is “Hail Mary”, a modern re-imagining of the story of the mother of Jesus Christ. So outraged were many conservative Catholics by this film that break-ins had been reported in many cities across the United States, and intentional damage to the film itself was common in such events. We spent an entire day going around the theater, looking for ways in and plugging up the holes. Even the manhole cover outside, which led into the Majestic’s basement, was secured from the inside as a precaution. On the day we first began showing Hail Mary, a crowd of about a dozen protesters with signs showed up to picket, followed immediately by our call to local news outlets. The coverage that followed helped give much notoriety and a significant boost in ticket sales to an otherwise unremarkable film, and brought some excitement to the lives of the theater staff for a few days.

Because I was an employee, I was afforded Guest List privileges. Never in my life was I so popular as when the Majestic showed the Talking Heads’ concert film, “Stop Making Sense” as a first-run film a year or so after its initial release.The theater was genuinely hopping in those days, and those brisk ticket sales helped the Majestic weather a long period of mediocrity.

Being an old theater, it had its share of ghosts too. I had a few encounters during my tenure there, and for the most part, they were creepy but not overtly menacing. Stories of suicide, film buffs reliving their most beloved moments for eternity, and just some plain old weird happenings were passed around, and the few of us that stuck around long enough at that dead-end, minimum wage job invariably acquired a few spooky stories of our own. I didn’t mind being in the darkened auditorium by myself, but if there was a problem with the lights down there, I wouldn’t go into the basement backstage without flashlights and another person.

Working in a movie theater seems glamorous, perhaps, but really it’s just another job. I had more than my fair share of free movies because of it, and though it was years before I could eat popcorn again, I enjoyed my time working there. The one possible exception to that: working on nights when we showed the Rocky Horror Picture Show.
Stop by next week to hear all about that…