This past Monday, May 28, was Memorial Day here in the US. It’s a Federal holiday, so a great many people enjoy the day off. It’s a day when we honor our war dead, and the patriotic displays can often be overwhelming. It also happens to be the weekend of WisCon, what used to be my local convention. I say “used to be” because I don’t really feel much kinship with that event any more. Instead of lots of warm greetings as in the past, I really only have a couple of close friends who still go, and while I cherish spending time with them while they’re in town for WisCon, the remaining time is spent anticipating the occasional and increasingly less frequent nod in passing from friends who still attend, but for whatever reason we’ve grown apart.
WisCon may one day mean more to me again, but of late the feeling of obligation outweighs the feelings of joy and excitement and inspiration, so ghosting the convention has become a thing for me. I still do the grocery shopping in support of the Carl Brandon Society party every year, but that’s Friday night and the convention has barely hit its stride by the time I drop off the goodies. I was delighted to have GoH Saladin Ahmed sign my copy of Throne of the Crescent Moon: if you haven’t read it, I HIGHLY recommend it as an excellent fantasy novel, and one told from a point of view outside of the normal, well-worn European tropes. As of the date of this writing, it’s $1.99 for the Kindle on Amazon.com for a limited time.

I missed posting on Monday because of the holiday, then Tuesday brought a regularly scheduled work day from the part-time day job, plus a seminar I wanted to attend later that evening, so time ran out to get it done Tuesday. Today is rainy and cooler: with the windows open a crack for airflow, I’m listening to the rain and enjoying a break from the oppressive heat of the last four days.

I wanted to remind everyone that I will be one of the guests at Meeplestock: a gaming convention in Stevens Point, Wisconsin. This year the event is held June 15-17: I will be there on Saturday and Sunday only, playing games and maybe — just maybe — leading a Pokemon Go! foray into the wilds of central Wisconsin. Meeplestock donates all profits to charity, so as well as being a fun way to spend a weekend or even just a day, it’s a worthy cause to boot. 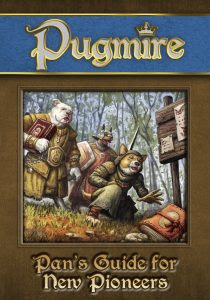 Final bit of (good) news for this week: A book that I contributed to in a substantial way just came out. Pan’s Guide for New Pioneers is a starter kit for Pugmire, and includes not only an extended adventure for beginning players, but also a number of pre-generated characters to help new players get started. You can buy a PDF version HERE, or you can wait a couple more weeks until the print edition comes out.