Cockroaches are everyone’s favorite disgusting pest. I’ve had my share of run-ins with the little buggers, and had to do a fair bit of research on them for a writing project, so I know how deep this particular rabbit-hole can go. 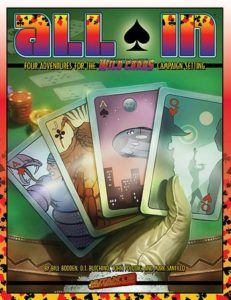 When I was working on my scenario, “Bugs in the System,” for Mutants & Masterminds: Wild Cards: All-In, I wrote about a Joker who basically morphed into a human-cockroach hybrid, with absolutely no apologies to Franz Kafka. I felt I needed to research these ultimate survivors at greater length to add verisimilitude to my writing; after the research, I didn’t sleep well for a week.

Did you know a cockroach can live for three days without a head? Yep.

Cockroaches are apparently fond of eating the glue out of books too. Bibliophiles, beware!

Basically, if you live in a city and are connected to a plumbing network, you have roaches. You may never see them: in fact, they might never venture into your home. The potential is still there, and cockroaches can fit through a space no wider than a dime. Wherever there is human habitation, cockroaches exist. It’s even said they inhabit McMurdo Station in Antarctica, though I personally have no concrete proof of that claim.

I used to work at an old movie theater, and the place, by virtue of being A) old, B) always fairly dark, and C) full of food (bits of popcorn, rice – from Rocky Horror showings – and spilled soda, meant they had plenty of snacks to keep them alive for weeks) was a haven for roaches. One time, picking up trash after hours, I picked up a soda cup, trapping a roach between my finger and the cup. Luckily for me, the cup was empty. On my way to work late at night (in those days I picked up a couple of janitorial shifts every week) I would pass neighborhoods in downtown Madison with the largest roaches I’ve ever seen. I would only see them on trash nights, when they were wandering around, trying to find a way back into the buildings from which they’d been inadvertently removed. This was before the days of cell phones, so no photos exist to haunt your dreams, but they were big — 3-4 inches long — and jet-black, with abdomens so large I could count the rings on them. I have no idea how roaches ever got so big in the northern climes, but I moved away from that part of town not long after, and have never considered moving back.