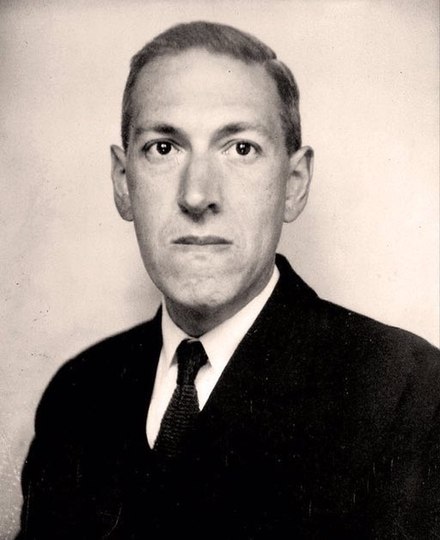 Jim Hines reminded me in his Live Journal (and elsewhere) of an ongoing argument: a lot of people are angry that Howard Phillips Lovecraft’s likeness is used for the statue given out as the World Fantasy Awards. I have conflicting feelings about this, but I’d like to add my voice to the discussion of What Should Be Done.

First of all, Lovecraft pretty much WAS a racist. You can sugar-coat it any way you want, saying he was “a product of his times” or “he was writing for his audience”, or whatever. Mohandas K. Gandhi was a product of his times too — and practically the very same times as Lovecraft, I might add — but he managed to be probably the least racist person in history. Please shut up about the whole “product of his times” argument: Lovecraft’s hatred of the bulk of humanity wasn’t just limited to people of color; he despised any non-WASPish white person too, as essentially being culturally inferior.

More than just racist, Lovecraft was well and truly a messed up person. He harbored fears about nearly everything — odd-looking trees, women, hidden family secrets — and had a number of highly unusual maladies, and likely some mental health issues as well. He died of cancer in 1937 at age 46 – three years younger than I am now. This year, on the anniversary of his birth (August 20), The Guardian published a list of “Ten things you should know about H. P. Lovecraft”. The site is a bit slow in reacting, so be patient. It’s worth a read, and several points may stand out in explaining some of Lovecraft’s many personality quirks.

Lovecraft was incredibly influential. Yes, I agree with this wholeheartedly. A large percentage of my professional writing output over the last decade owes a tremendous debt to H.P., either directly — for my work on Lovecraftian tabeltop RPGs like Achtung! Cthulhu, or his influence on my thinking regarding horror themes in short fiction, as can be seen (I hope) in my short story “In The Shadow Of His Glory” from the anthology Sidekicks!. Were it not for Lovecraft’s writing, I probably wouldn’t be a writer today, though as I keep collecting rejection letters, I am reminded of Lovecraft living on something like a can of beans a day at the “height” of his writing career. There but for the grace of god…

Lovecraft was also extremely generous with his time to his friends, corresponding tirelessly and offering advice and editing help to his circle of fellow writers with whom he felt kinship. However, the true measure of a person is not how we treat our friends, but how we treat our enemies. Lovecraft falls down a lot on that point.

An interesting article on Lovecraft appeared very recently (October 13. 2014) in the Wall Street Journal. It discusses why Lovecraft is still important today. I encourage reading this article; it can be found here.

The argument that Lovecraft didn’t write fantasy doesn’t hold much water for me. Frankly, categories like that can be pretty broad and difficult to quantify with any precision. (Remember the whole ‘What is art?’ thing? Yeah, let’s not go down that road again, okay?) Lovecraft is primarily known for writing horror, true, but his fantastical themes and images more than qualify some of his work, I think, for the realm of fantasy. I think this argument is a toss-up.

The statue is U-G-L-Y. Yep. I agree. If I were to ever win one of those (mighty long odds, I’ll grant you) I’d be reluctant to keep it out in the open where I might come upon it suddenly and without warning. With apologies to Gahan Wilson, whose work I adore, the caricature of Lovecraft, so lovingly sculpted in GW’s world-renowned style, is painful to look at. For some reason, I like Wilson’s work better in 2-D representations.

Frankly, I don’t think any living or formerly living person should be the subject for the World Fantasy Awards. It should represent something more closely associated with fantasy themes — a dragon would be suitable, I should think. Given the vitriol of the discourse on THIS topic I don’t think we could ever agree on what the Award statue should look like, but maybe I grow pessimistic in my old age.

Lovecraft is — and should — still be one of the iconic authors of American literature of the fantastic. His purple prose was hardly The best example of what most people define as good writing, and yet his ideas — chiefly, that humans are NOT the center of the Universe and that random chance plays a larger role than any so-called destiny does in events — were groundbreaking for his time. I personally owe HP a lot, but I agree that it’s time for a change. Make the design of the World Fantasy Award more in keeping with fantasy themes, rather than an uncomfortable tribute to a guy with some uncomfortable ideas about his fellow humans.

One thought on “The People vs. H. P. Lovecraft”